Still Hating in the Name of the Lord 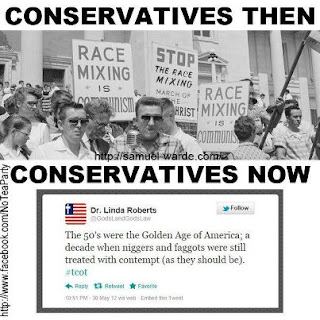 And Jesus said 'Those who do not love do not know God, for God is Love.' I'm wondering how many 'Believers' believe these words.

(I first posted this on another blog site in January, 2013. It's even more relevant today.)

This showed up on my Facebook page. I was a bit stunned that this "Dr. Linda Roberts," who claims to be a god-fearing Christian, would write such drivel. But, those sort of folks are still out there, it would appear.

First, hatred is still alive and well(?) in the United States. It can only be resolved, not by more hatred, but by compassion. Compassion means action, which is much more than just a feeling of sympathy or even empathy. True compassion is action, and in this case, it means sharing yourself in positive and determined ways with the world. It's doing the least harm and the most good.

To serve is to win. Period.

Second, I posted this because according to some of my conservative friends, the attitude displayed in the above poster runs rampant among Far Right and ultra conservative political players at all levels of government. Watch them closely. They once caused a civil war in the U.S. If this attitude really is as prevalent as I'm told, another civil war is not necessarily out of the question.

Too many of us like to believe it was 'better in the good old days.' It wasn't. If you are non White, female, gay, or immigrant, you've been butting up against hatred and fear since the landing of the Puritans.

And with the current conservative political climate, the Beast has reared its ugly head again. Only now, it has technology to back it up.

It's up to you and me to help bring the world out of the darkness. We can't fix the entire planet, but we can "brighten the corner where we are."*

Because we all rise, or fall, together.

"Love one another, even as I have loved you." Jesus