How About a Marriage Amendment to the US Constitution Based on the Bible... 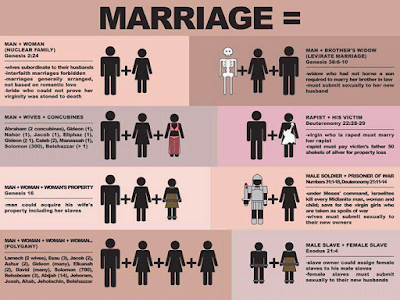 What would it take to make the bible the Law of the Land?

During the George W. Bush years, evangelical leaders and Christian businesspeople pushed for a Constitutional amendment codifying marriage entirely on Biblical principles. The idea hasn't faded. In fact, with the inauguration tomorrow (January 20, 2017) of Donald Trump to the Presidency, hopes are high that it can be reinvigorated and even passed through the GOP controlled Congress.

It's a tricky little amendment. Decide for yourself if you think it's a good thing.

E. Since marriage is for life, neither this Constitution nor the constitution of any state, nor any state or federal law, shall be construed to permit divorce (Deuteronomy 22:19; Mark 10:9).

F. If a married man dies without children, his brother shall marry the widow. If he refuses to marry his brother's widow or deliberately does not give her children, he shall pay a fine of one shoe and be otherwise punished in a manner to be determined by law (Genesis 38:6-10; Deuteronomy 25:5-10).

G. In lieu of marriage, if there are no acceptable men in your town, it is required that you get your father drunk and have sex with him (even if he previously offered you up as a sex toy to men young and old), tag-teaming with any sisters you may have. Of course, this rule applies only if you are female (Genesis 19:31-36).

So, what do you think? Are you as convinced, after reading the above little treatise, that your views on marriage should remain the same? Are you as certain as ever that the Biblical way is the best way when it comes to marriage?
Read more »
Posted by Richard Kent Matthews at 10:22:00 AM No comments:

Living Life As If It Matters: Some Musings from George Bernard Shaw

Life Is No Brief Candle

George Bernard Shaw had a lot to say. Much of his musings are, well, not my style, but these particular quotes are winners. They've been used, reused, and used again. Still they remain pertinent and powerful. Read, contemplate, enjoy...

I am of the opinion that my life belongs to the whole community and that as long as I live it is my privilege to do for it whatever I can. I want to be thoroughly used up when I die, for the harder I work the more I live. I rejoice in life for its own sake. Life is no 'brief candle' to me. It is a sort of splendid torch which I have got hold of for a moment, and I want to make it burn as brightly as possible before handing it on to future generations.

This is the true joy in life, the being used for a purpose recognized by yourself as a mighty one; the being a force of nature instead of a feverish, selfish little clod of ailments and grievances, complaining that the world will not devote itself to making you happy.

Each of us is called to a choice: Do we wrap ourselves in self-pity, arrogance, and greed? Or do we step out into the world, risks and all, and declare ourselves to be a contribution, serving each other to the best of our abilities?

The answer will determine the outcome of your life...and the world.