Deep Hate and How to Tame It (A Reminder) - Part II

(Reprinted from another blog posted in January, 2013)

So you think you have no real power in this world?

It's because of people like you that the world hasn't totally imploded. And you are needed now more than ever. Don't let your sense of smallness stop you from changing the world. Step into the role you've always known was yours to fulfill. Read on and save the world!

You play a major part in the healing of the world. In fact, without you, we may well go down the tubes. But you won't let that happen. You will take it upon yourself to help the world open its collective eyes, minds, and hearts. You won't do it by trying to shove your religious beliefs down our throats; rather, you will reach out your hand to us in love (respect) and a sincere desire to help. And you will do it in four simple steps. Again, not necessarily easy steps, but simple nonetheless.

First, you will take charge.
You will quit listening to the voices of fear, apathy, and selfishness that tend to clap around your inner and outer ears, telling you that you can do nothing to help this useless species called Human. You’ll quit giving into the habits of laziness and sloth. Oh, you have those habits, if you're totally honest. But they don't have to be your dictators.

Second, you will take responsibility.
You are a member of the human family. What happens to one happens to all. Pain, suffering, cruelty, no matter where they happen in the world, are part of your personal legacy. If you want them to stop, you must be willing to place yourself squarely in the middle of the fray. You are related to all of us.

Third, you will take action.
This may be the simplest of all. If you knew how many organizations and groups of all sizes need your help, you would quit the excuse making and be out there everyday, literally saving the world. Everything—from environmental causes to political action groups—is clamoring for your attention. Raise your intellectual and emotional radar, and the right group will show itself. If you're already involved, intensify!

Read more »
Posted by Richard Kent Matthews at 5:00:00 AM No comments:

Deep Hate and How to Tame It (A Reminder) - Part I 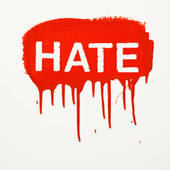 (I first wrote this article for another blog in January, 2013, as Pres. Barack Obama began his second term. Now, we have just inaugurated our 45th president, Donald Trump, as of January 20, 2017.

The nation seems to stand divided in ways I, personally, haven't witnessed since the days of the civil rights movements. Is there a solution?

This article is my way of saying yes.)

Hate is a strong emotion--stronger than most when it goes deep. It can move individuals, groups, nations to carry out unimaginable destruction and grief. It already has, down through the centuries. It continues today--in the forms of terrorism, racism, sexism, homophobia, child abuse, gun abuse, and more.

Those of us who consider ourselves civilized have good reason to be scared. It seems as though there is nothing we can do to halt the growing menace. Our police seem weak, our governments impotent, our borders unprotected, and more and more 'unbalanced' individuals are armed with high powered weapons fit for the military.

What hope is there?
There's more than hope. And in this two-part series, you’ll discover how you can help bring hatred to its knees. You can and must play a major role in bringing sanity back to an insane world. You have it within you and around you to save this planet and her people, her creatures, her resources. But will you? Or will you succumb to the fear? No need. You will now have the tools to turn on the light.

You probably live in a city or town that has community access TV channels. In my city, there are several.

The other night, I was flipping through the channels and happened upon a weird little program put on by the so-called Aryan Nation. This white guy, around 30, was spouting about how the White race is superior, how he hated Hispanics and Jews in particular, and what we needed to do to get rid of "the pests." He didn't come right out and advocate murder and terrorism, but it was definitely implied.

The guy claimed that the White race had given all its best stuff—technology, literature, music, art—to the inferior races of Asia, Africa and South America. And they had used it all against us.

What?
He said that the other races, especially Hispanics, were overrunning the United States and turning it into a Third World country. They only take, he said; they don't really contribute anything of substance.

What?
He said that the Jews were using the US to perpetuate their own agenda, that is, to totally control the Middle East. They take American money from American banks, that is, American pockets, to finance their covert operations around the world.

What?
Then, in a final bit of rage, he declared war on Islam. The Muslims, he claimed, were pouring into the US and setting us up for the internal War of Wars. They were planning on bombing everything possible to bring the US to its knees. Then, when it was weakened, the Muslim groups from outside the US could come and take control, demolishing American democracy—and thus, the democracies all over the world—while setting up an Islamic theocracy in its place.